First person: How cops under stress make decision to shoot or not shoot

For this story, I spent a day at the Yakima Police Department with an outside trainer who came in to teach community members about the physiological effects stress has on the body, as pertains to cops in shoot-or-not-shoot situations.

I also got to go through a simulator to see how my own reactions fared in violent, high-stress scenarios. Spoiler alert: I do not have cat-like reflexes.

While the trainings were obviously from the police perspective, they carried valuable reminders to us in the media as we try to make sense of all the recent police shootings.

Yakima Regional Medical and Cardiac Center was sued in 2013 over its charity care practices. In the intervening years, lawyers for the plaintiffs have presented evidence alleging that the hospital (along with Toppenish Community Hospital, both now owned by Community Health Systems) deliberately sought to turn poor people away from its doors and made no effort to provide financial relief for indigent patients.

–Dramatic documents shared in 2015 reveal that Regional offered rewards for employees who squeezed more money out of indigent patients: http://www.yakimaherald.com/news/local/documents-reveal-regional-s-past-tough-stance-on-charity-care/article_f1a622fc-6803-11e5-8d5e-f76185909e77.html

Update: A condensed version of this blog post ran in the Yakima Herald-Republic on Nov. 20, 2015. Read it here.)

Someone shared a piece on Facebook today titled “I Hate Adoption.” It took me two tries to read it all the way through, as the author’s assertions left me both indignant and sad. She doesn’t think adoption is beautiful; she thinks it means brokenness and that God hates it.

I wanted to offer a different point of view. And since this is the only blogging platform for which I still remember the password, I decided to share it here. This is from Molly the person, not Molly the reporter; it is not newspaper or portfolio-related.

My parents took me home from the hospital when I was a week old. They fussed with the car seat, arguing over who got to sit closest to me, and brought me to my grandparents’ house, where a giant “Welcome home” banner hung over the garage and my extended family had gathered to celebrate and eat cake while I snoozed innocently away.

Note that I said, “my parents.” Not “my adoptive parents.” My parents are the ones who raised me, who fought over who got to change my diapers (still don’t understand that one, Mom & Dad) or stay up late listening to the baby monitor. My dad is the one who cradled me against his chest, making up words to songs as he waltzed around the kitchen, trying to lull me to sleep. “We could have daaaanced all night; we could have daaaanced all night; but no, we had to have a bottle.” My mom is the one who rushed me to the doctor’s office anytime I developed even a hint of a sniffle, who read me storybooks in bed whenever I was home sick from school, who let my brother and me push the couches together to make a couch-boat from which to watch our favorite Disney movies.

On my bedroom wall above my dresser, for as long as I can remember, there was a poem written in scrolly calligraphy that hung in a blue frame. It was the Legacy of the Adopted Child. “Once there were two women who never knew each other. One, you do not remember; the other, you call mother.” More: “One saw your first sweet smile; the other dried your tears.” And perhaps the most poignant: “One gave you up; it was all that she could do. The other prayed for a child, and God led her straight to you.”

My favorite blanket growing up was pink plaid with white squares stitched together, on which my mom’s first grade class had drawn (sometimes disturbing) cartoon pictures for me once they found out about the adoption. They were so excited that I would be coming into her life, because she was so excited.

When I was in fifth grade and my hair inexplicably started falling out, the doctors wanted to do a biopsy — cut a chunk out of my scalp — to help them figure out what was going on. But I was too scared, so my dad let them take a biopsy from his scalp first to show me that it was all OK. He even got stitches. He still brings this up sometimes to remind me that he’s the best father in the world, and I’m still thankful.

My parents never concealed from my brother and me that we were adopted. We even had a book, “Why Was I Adopted?” that explained things quite well. “Sometimes, your birth parents are so young that it would be like kids raising kids,” read the page with a picture of two teenagers poring over the Sunday comics with a baby nearby. “Sometimes, children are born in war zones and it’s not safe for them to stay there” was accompanied by a picture of a baby crouched beneath an Army helmet. And my favorite: “Adoption doesn’t mean your parents went to a store and picked you out,” with a picture of a vending machine full of babies. (The exact wording might be different; if anyone still has their copy, I’d love to hear more.)

Growing up, I always liked being adopted. It made me special, different from all the other kids, and it was great fun to surprise friends or classmates who never would have believed it. My brother and I don’t look unlike our parents, though there are no true familial similarities, so everyone just assumed we were all blood-related.

For me, being adopted meant I was chosen. It meant my parents worked very, very hard to get me, going through more than a year of paperwork and legal proceedings and hospital bills to make it happen. And it meant my biological parents cared enough about me to find a loving, stable home that could provide me with the upbringing they were unable to offer at the time.

I bear no ill will toward my birth parents for giving me up. I respect their choice, and I am so thankful to have the parents I do. I’m also thankful that, as an adult, I’ve been able to establish relationships with my birth parents and their families. My birthdad contacted me right before I started high school, and I’ve grown close with his wife and kids over the years, dropping in for dinner at their house, sharing music we like and visiting each other when we can. Later, my biological grandma on my mom’s side reached out when I was in college. She even came to my departmental graduation, when my parents could not attend. Partly thanks to her efforts, I was able to meet my birthmom when I was 24, and I’m in regular correspondence with her two kids, and have been meeting various aunts and uncles along the way. Everyone has been excited; everyone has been welcoming. I find I’ve been loved for years by people who’d never even met me. 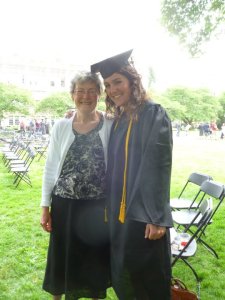 I get to have a grandma now, when all my grandparents have long since passed away. I have two new sisters and two new brothers, when I grew up with just one brother. I have aunts and uncles with whom I’ve been thrilled to find I have a lot in common. My life is so much richer simply because I am adopted.

And I think that’s how God envisions his kingdom. We are adopted into his family, even if we already have beautiful families of our own. And in that adoption, we acquire even more family. Those of us without sisters are blessed with sisters in Christ. Those of us without parents or grandparents or aunts or uncles become part of the huge extended family of Christ, where people are overflowing with love to give to those around them. We may have already been blessed, but we get to be even more blessed as part of God’s family.

So I am incredibly thankful for all the family I have. I know how fortunate I am. But I still resent it when people ask me about my “real” parents. My real parents are the ones who raised me, who took care of me through skinned knees and years of braces and trips to the emergency room; who yelled at me for fighting with my brother or refusing to do my chores or answering back with my own particular brand of snottiness. They’re the ones who came to every soccer game and every piano recital; who volunteered their weekends and weeknights to help with my high school drama productions. They’re the ones who continue to support me, who answer my frantic late-night phone calls when I’m sobbing that I’m not good enough for this job or that boy and that I’m never going to achieve what I want in life. My real parents are the ones who won’t shut up about me to friends and coworkers; who show me off whenever I visit; who tell me over and over again how proud they are of me, how much they love me, what an incredible person I am. If I am at all worthy of their praise, it’s because of what they taught me, because of the way they molded and shaped me from childhood into my adult life.

I wanted to share my story because adoption is so much more than how it’s often painted in religious circles and news publications. Adoption doesn’t mean my parents settled for “less than” a “natural-born child of their own.” It means they wanted me so badly that they worked for years to get me, and then did the same for my brother. And it doesn’t mean that my birth parents didn’t want me. It means that they loved me so much that they realized a life with them would not be the best thing for me, so they made the sacrifice to give me up in order to give me a better life.

Adoption is beautiful, and I believe it fits right into the heart of the Gospel. The good news is that family doesn’t end with blood; that family can be by choice, not by chance. God opens his arms and welcomes us into his family, and we have the ability to do the same for others. That’s an incredible gift to receive, and, from what my parents seem to think, an equally incredible thing to give.

The adoption poem sums it up well. “Heredity or environment – which are you a product of?” it asks at the end. “Neither, my darling, neither. Just two different kinds of love.”

The Senate passed the House-amended version of a bill to regulate and license medical marijuana dispensaries in Washington state, but Gov. Chris Gregoire still isn’t going to sign anything that would put state employees at risk of violating federal law by granting licenses to people growing what the feds still classify as an illegal drug.

When the governor signed into law a bill prohibiting motorcycle profiling last week, she was unaware that a man who had been convicted of killing an Oregon police officer 30 years earlier was standing a few feet away. She says it doesn’t change anything – bill signings are public; they don’t screen visitors and don’t plan to start doing so now.

Two senators have introduced a bipartisan constitutional amendment to reduce the state’s debt limit and reduce the portion of the operating budget that goes toward paying off debt service, which is already more than 6 percent. To ensure its passage in the House, they’re currently holding the capital budget hostage, declining to negotiate on it with House Democrat leadership until they approve the amendment.